In the middle years of the 1980s, I began to develop a method for scrying the actual aboriginal degree system for the authentic magical tradition. I had begun scrying in the early 1960s, using traditional crystals and magical mirrors, and later, adding yoga, biofeedback and so-called "astral projection I engaged in a variety of experimental and traditional techniques, from "rising on the planes" in meditation to the sexual magick of "scrying in the flesh" — using sexual energy to scry. I also became acquainted with the correspondence system of Crowley's 777. The flash of realization came on the same November day in 1988 in New York City when, immediately after being consecrated a bishop in the Oriental Templar tradition, I acquired the magnum opus of T Michael Bertiaux, The Voudon Gnostic Workbook. I struggled with its somewhat eccentric organization, but recognized its essential points on how to do the fundamental Work in a systematic manner, albeit not without much trial and error. I conferred with Bertiaux on my insights, reread carefully both 777 and Qabalistic source documents, and by the 1990s was ready for experimental developments.

Details of some of these experiments, many conducted on the premises of a lodge of one of the great magical orders of antiquity, gathering about me a group of able and eager students, most of whom I had worked with before. The methodology was to take the "power points" or points chaud" of the so-called "Voudon Gnostic System" and empower individual participants with select or full sets of these points. The participants were then asked to experiment and record results using a meditation technique inspired by Bertiaux and the late W.W. Webb.

It was an incomplete system at that point, and some less sophisticated but ardent students received too many empowerments too quickly, with quirky, disappointing or dangerously overly intense results. The method, in brief, was this:

Recognizing a correspondence between the consecratory Gnostic System and traditional Ecclesiastic System, various initiatory systems with a focus on a moment or moment of empowerment, I selected the final English language definitive system of the Rite of Memphis of 97 degrees, those above the ninetieth being largely administrative, and linked these to the points chauds ("hot points") of the Bertiaux system of empowerments. The empowered individual was given an exercise in which they were told that to obtain the essential meaning of a given degree for them, select the name of the degree, assume the "prophetic asana" as taught me by Bill Webb (essentially, the Islamic prayer posture, but with head lowered carefully beneath the body as far towards the groin as could comfortably be managed. A scribe would select a selection and read it at random from the Judeo-Christian Bible or a Class A Thelemic document (or other holy book). The scryer would then meditate upon the degree and passage until he or she obtained a Word of the degree (sometimes a phrase), which the reader and scribe would record. The record of the experiment was then submitted to me, and I evaluated it using the then known methods of traditional Qabalistic validation for Biblical verses, or New Aeon English Qabala for Class A texts, sometimes bringing in other advanced practitioners for consultation. The process, if successful, would reveal the next step in empowerments for the individual, and was thus, in a sense, self guiding. Sometimes this led to precognitive powers, advanced travel in the body of light to other terrestrial locations and times, healing powers, et al.

After several years of experiment, I reported on the matter to that date. After the turn of the 21st Century another breakthrough took place, when additional correspondences that directly impact on effectiveness were discovered.

While my area of concentration has been tracing and understanding the developments in the Authentic Magical Tradition since the 1600s, I have traced the broad outlines of initiation back to ancient Sumerian Civilization. There, after a mysterious age of enlightenment, a priesthood developed an initiatory system which has survived, in somewhat fragmentary form, in successive magical societies ever since. There is a very ancient story that accounts for this system of initiation. Kenneth Mackenzie relates that "According to Berosus, there appeared in the Erythrean Sea — the modern Persian Gulf — bordering on Babylonia (actually Sumer, as we have learned since Mackenzie's time — TAG), an animal endowed with reason, whose name was Oannes or John, perhaps the Anu of the Assyrian inscriptions…the usual appearance in which it was visible was in that of a fish, having beneath its fish's head a human head, and feet beneath like those of a man…he used in the daytime to converse with men, but never ate in common with them; that he communicated a knowledge of letters, sciences and arts. He taught the art of building, the principles of architecture and geometry; he was also the first instructor in botany and agriculture." This system was taken up by the Priesthood, whose garb in Sumer, Assyria, Babylonia and eventually even Roman Catholicism, included a fish-head miter and robes ending in a fish tale. The Masons eventually took up the teaching of this system in graduated initiations, but had become fragmentary, the original number of points or initiations being 360, preserved as 90 in the Egyptian Rite of Misraim (one fourth of the system) in the West, while maintain as a system of approximately 360 points in the East as the healing system of acupuncture, to which it corresponds.

As one writer notes, "It is from Babylonia, but originally from India, that we of the West got our manner of dividing the circle into 360 degrees. ...The number 360 arises from an old Theosophical teaching of the ancient God-Wisdom of mankind, to the effect that the true number of days in a year is 360, the cycle of the seasons. But as the ages passed, and due to the fact that the earth is an individual with a will of its own, it does things at times, not exactly disobeying the mandates of the system in which it is enmeshed, but determined, as are the other planets, to move a little on its own. So that as the ages pass along—taking the mean of 360 days in a year—the daily rotation of the earth quickens a little bit for a while, and the days become 361, and then 362, in a year, and then 363, 364 and now at the present time our year consists of 365 days and a fraction. Then this libration returns to the normal 360 days in a year; and then the Earth slows down its rotational period, so that for ages, any one of our Earth years is less than 360 days: 359, 358, 357, 356, until it reaches the end of that libratory cycle. Then it begins to swing back; and thus the earth continues to follow this libration.

"That is why the Babylonian initiates, getting their ancient wisdom originally from India, divided the circle into 360 points or degrees; because in their Temple-crypts and Initiation-chambers they were taught that the true earth-year consists of 360 days. Thus the circle became adopted in mathematics as divided into 360 points, cogs, degrees — call them what you like. It is a wheel, a wheel of time, which actually applies to the earth."

Another source informs us (

"The final step in this story, occurring probably some time in the Ur III period, right at the end of the third millennium, was the introduction of a sexagesimal place value system. The number of signs was reduced to just two: a vertical wedge derived from the small cone often used for the base unit, and a corner wedge, derived from the small circle. The corner wedge had a value of ten vertical wedges. In the sexagesimal counting system described above, the next size unit was the large cone, worth six circles. In the place value system, this unit was denoted by the same-sized vertical wedge as the base unit, and it was worth six corner wedges. Now the pair of symbols could be repeated in an indefinitely larger alternating series of corner and vertical wedges, always keeping the same conversion factors of 10 and 6. The price paid was that a vertical wedge could now mean 1, or 60 (6x10), or 3600 (60x60), and so on. Its actual value was determined by its place.

The sexagesimal place-value system greatly facilitated calculations, but, of course, at the end of the day, the final answer had to be translated back into the underlying metrological system of units. So a problem would be stated in proper units and the solution would be given in proper units, but the intermediate calculations were carried out in the new sexagesimal place value system." 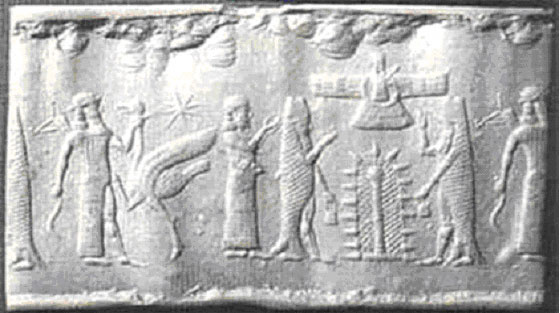