I couldn't have said it nearly as well.

Comments by the ONES who get ALL of this...

[Anyone who gets ALL of this is either Mick, or me, or four or five other people, but for years I have been looking for some way to say something meaningful about the New Aeon English Qabala (NAEQ). Last time I tried, it was as metaphor, and I got crucified thrice over by those who should know better. Laughter often trumps all critics, so here it is; for more, uhm, sobering detail, go to the web site of the Hermetic Alchemical Order of the QBLH, Achad's Liber 31 edited and annotated by (ahem) me, del Campo's book mentioned below, and Crow's dictionary of NAEQ. One tip: try it several times before you trash it. T A G]

It was a morning like any other. After taking my breakfast at home, I put in an appearance at the S— Club. There, I spent a leisurely mid-morning drinking tea and sherry, reading the morning papers in a desultory fashion, and chatting with Lord H— about yesterday's dismal Test Match at Lords. Around noon I headed over to Mailboxes Etc. on Hawthorne Boulevard, planning to pick up the day's correspondence and then head back to the S— Club to read my letters and perhaps sip a little cognac. I found the usual mundane tripe in my box: creditors demanding payment, a letter offering me initiation into a masonic society of which I had never heard, and numerous postcards from personal correspondents around the globe. I sighed, but then noticed that there was also one of those orange slips of paper indicating that I had received an item too large to fit in my box. Taking the slip, I hastened over to the counter and presented it to David, the proprietor of the mailing establishment.

"What ho, David!" I said, "Perhaps you've given me something a little more interesting this time, eh?"

David took my slip and went to fetch my package. On his return, I fancied that he looked a little pale.

"You have something from Luxor Press, sir," he said in a shaky voice, and handed me a bulky envelope.

Luxor Press! No wonder David looked a little out of sorts. They and their eccentric owner, John Crow, had received notoriety a couple of years ago when they released an edition of the blasphemous 'Pnakotic Manuscripts,' as well as unveiling plans to publish the Timmins English translation of Professor Von Juntz's 'Unaussprechlichen Kulten.'

Opening the envelope, then starting involuntarily. They had sent me the

'New Aeon English Qabalah Revealed' by Gerald del Campo! David, seeing the book, burst out with a shrill "Del Campo! The Mad Argentinian!" before he could help himself. Others in the shop heard this ill-advised outburst and it was followed by startled gasps from those present. The pretty Rastafarian woman working the counter clutched tightly at her massive Ethiopian cross and whispered prayers to Selassie.

"Hardly mad, David!" I said, perhaps a little too loudly. "A trifle eccentric, perhaps, that is all. Why, one can hardly study the English Qaballah without becoming a little strange. Look at Achad, Stratton-Kent, Greenfield."

The store had become mostly silent by now. Its customers had either left hurriedly, or were listening to us with worried expressions.

"No, David," I went on. "I believe that del Campo is on to something. Why, once we understand the secrets of the Book of the Law, we shall know all! We shall be as Gods!" "I pasted the sheets from right to left and top to bottom once," said David timidly, "and I beheld..." But I rudely cut him off, caught up in my own enthusiasm.

"Yes, we shall know all! The RPSTOVAL riddle! The chance shape of the letters! Those goofy symbols in Liber VII! Why George W. Bush became president! Olalam! Imal! Tutulu! Assume The Flamingo!"

My voice had risen to fever pitch in my enthusiasm. It was then that I heard a low, clear voice behind me.

"Ompehda. Belahsti. Kazik, Kazik." It said in a tone that was at once menacing yet robotic, as if made by some damnable machine. I spun round, and beheld a tall man dressed all in black, in an expensive suit and tie. His ethnicity was difficult to place: Italian perhaps, or Arabic. His eyes were hidden by mirror sunglasses, and I was glad that they were, for I fancied that should I behold them they would appear dead, like those of a shark.

"It is a mistake," he continued in that unearthly tone, "to learn too much about these matters. Certain things are not meant for you to know."

"Ah, well, ah, quite. That is, I don't believe that we have been introduced, Sir."

"Gray. Mr. Gray. I must bid you Good Day, Sir, but I believe that we shall meet again."

It was in a confused and shaken state that I returned to the S— Club, and three brandies did little to calm me down. And I consumed more brandy throughout the day, and into the night, as I studied the unholy book that

Luxor Press had sent me. Yes, many things are clearer to me now. I know why all is hidden within the stone, within the coffin, within the mighty sepulchre. And yet I wonder if such things are meant for human knowledge. Dawn is breaking now, and I must steel myself to leave the S— Club and return home. But I fear to do so, for I do not wish to meet that dark stranger, Mr. Gray ... If you dare. 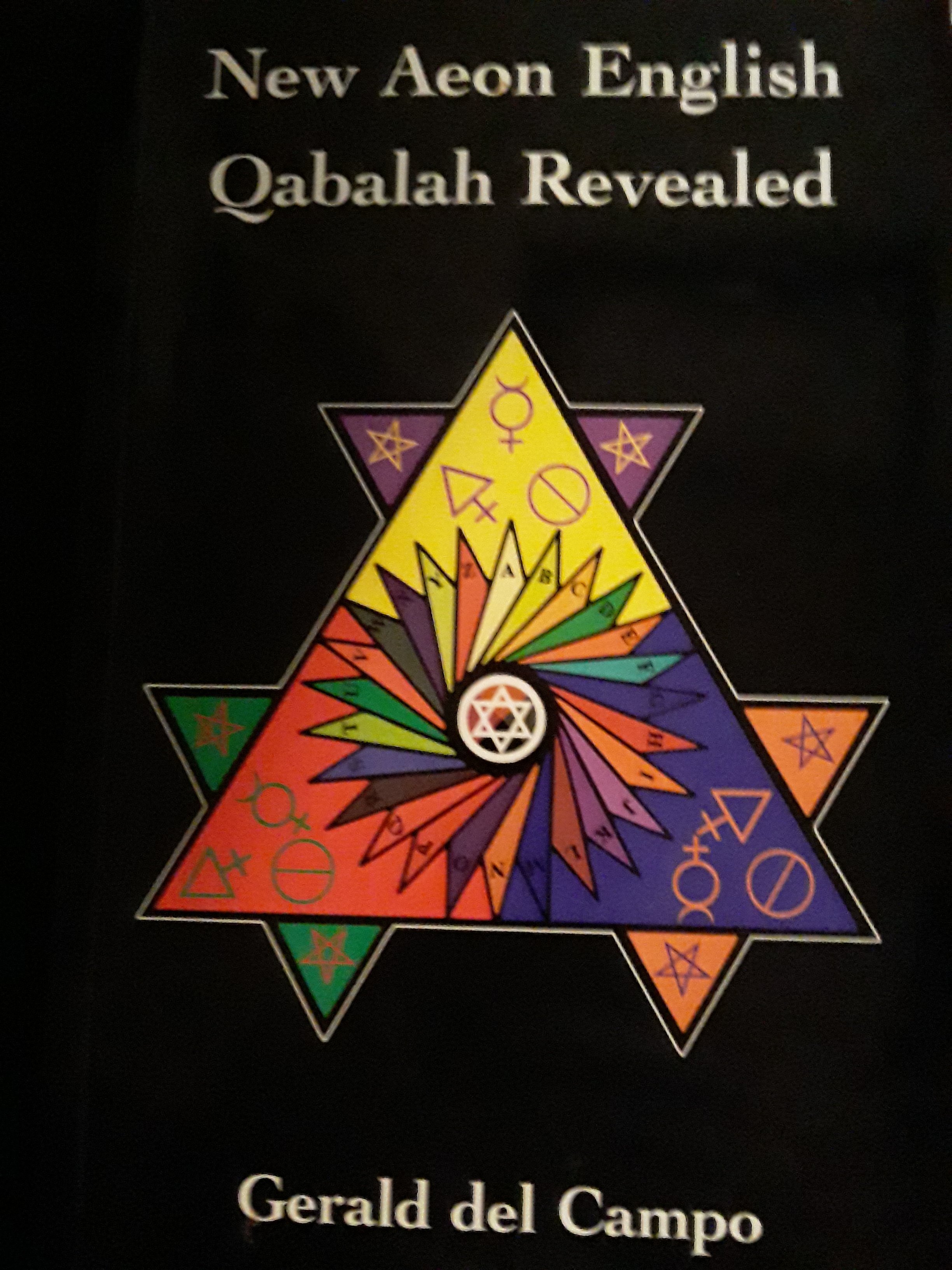 From its origin in 1918, the "English Qabalah of the New Aeon" has become the foundation for a new system of ritual and magic. In New Aeon English Qabalah Revealed, Gerald del Campo discusses this history along with its practical applications.

The controversial discovery of the Qabalistic key to Liber AL vel Legis by Frater Achad, the magical son of Aleister Crowley, and its publication in Liber Thirty-One has in recent decades produced a system of magic that includes methods for divination, sigils, and invocation.

In New Aeon English Qabalah Revealed, del Campo explains the "New Aeon" English Qabalistic system and its many uses including: how to use NAEQ to make magic squares and sigils, employing NAEQ to perform invocation, and utilizing NAEQ to reveal deeper meanings in Class A texts. In addition, del Campo shows how the new English system works with the existing Qabalistic Tree of Life. Also included are two appendices containing a numerical dictionary with hundreds of words and a Qabalistic breakdown and analysis of Liber AL vel Legis.

Gerald del Campo has written a revolutionary work with the potential to set the direction of English Qabalah research for the future. Designed for those studying magic alone or in a group, this system works for anyonenot only those already familiar with the Qabalah or ceremonial magick.

Gerald del Camp is also the author of New Aeon Magick: Thelema Without Tears. Active in various magical orders, he has been studying Magick, Thelema, and Qabalah for over 20 years. Del Campo lives with his wife and daughter in Portland, Oregon.

The controversial discovery of the Qabalistic key to Liber AL vel Legis in 1918 by Frater Achad, the magical son of Aleister Crowley, sparked years of study and examination by talented magicians using it to uncover secrets and deeper meanings in magick, mysticism, and other Western esoteric traditions. Upon reading the key known as New Aeon English Qabalah, which would later be published as Liber Thirty-One, Crowley, himself, replied, Your key opens the Palace. CCXX [Liber AL vel Legis] has unfolded like a flower. All solved, even II.76 & III.47. 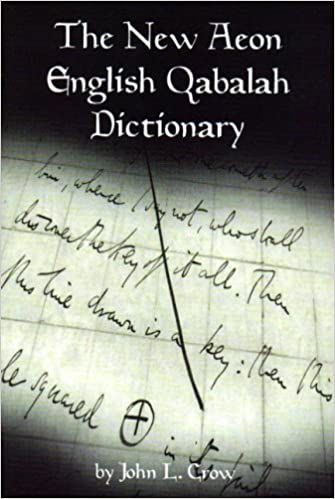