The following is abstracted from In the spiritual tradition of the Rites of Memphis and Misraim, Bertiaux also chartered Greenfield as Master of The Lodge of the Sons & Daughters of Aaron on October 10, 1992 C.E..   Photo by Frater 117. See Certificates below.

Please note that, as Tau Michael Bertiaux has held, since June 16, 1979, all major independent lines of the traditional apostolic succession through consecration at that time by Bishop Forest Gregory Barber, all such lines flow to me by virtue of my consecrations by Bertiaux. Bertiaux, later reconsecrated by Jorge Rodriguez, then also consecrated me.

In line with my former associates at OTO's Ecclesia Gnostica Catholica, Patriarch Tau Silenus and Primate Tau Apiryon, I hold that there is a distinction between, on the one hand, Spiritual Appointment and Consecration in the lineage of Edward Alexander Crowley (Baphomet XI°) and, on the other, the traditional Apostolic Succession. Both have their importance and validity.

In my view, and in having held both, I believe I can render a rather well informed and detached opinion on this. I held the succession of Baphomet as a Bishop "now and forever" through Consecration by both the Absolute Grand Patriarch of the Ordo Templi Orientis Ecclesia Gnostica Catholica (November 19, 1988). While I am no longer associated with EGC-OTO, I hold with the Augustinian doctrine “once a bishop—always a bishop”, though I claim—and would have—no authority within OTO as of late July, 2006.

As Tau Silenus recognized me in writing unconditionally as Bishop in writing prior to my becoming an OTO initiate, I maintain I hold the succession of Baphomet, such as it is. Others are free to disagree; nobody questions my Full Apostolic Succession, which is what counts magically.

The "Baphomet descent" doctrine peculiar to the current OTO management was, in my opinion, a reaction to questions about their own Apostolic Succession, and nothing more, a silly over reaction typical of them. I also hold the Latter Day Saints succession through Bishop Conway, and the Doinel Succession through various consecrations. The Honorary Title of "Rabbi" was recently also given me by the Fellowship Assembly, which I accept in the sense of being a "teacher of spirituality" in the Reform Jewish tradition.

'Repair of the World'

What Allen Greenfield Really Believes
(A link to the

It is my own conviction that verifiable spiritual powers are demonstrably attributable to various lineages of spiritual succession, be this the so-called "Succession of the Apostles" (which descends from the ancient Roman State Religion through Roman Christianity), various non-apostolic but similar lines of succession (Latter Day Saints, Doinel Gnostic, New Aeon, et al), or blood lineages as in the hereditary Hindu Brahmins or Hebrew Kohenim, from which I descend. I profess only two fundamental convictions in these endeavors: I advocate Scientific Illuminism, or the method of science employed in pursuit of the aims of religion, and I holds firmly to the conviction that the world as-it-is is sufficiently unsatisfactory that exploration of almost any ethical "out-of-the-box" alternative, however unconventional, is worth the effort. We consider this Tikkun Olam, the attempt to improve the world as envisioned in our native great Hebraic tradition.

I hold also with Tau Michael Bertiaux that "Apostolic Succession" is of value as a continuation of the most ancient priesthoods of Egypt and Rome through the Christian communion, and that special mystical powers "objectively" are transferred by consecration in these lineages. My particular assertion is that this can be objectively verified through scientific experimentation, similar to that performed in parapsychology with spiritual healers. The legend of Ormus, the Egyptian Priest converted in apostolic times to Christianity, and transforming Egyptian Rites into a mode suitable to the Aeon of Osiris is, at least allegorically, a fair hint of the orderly continuity between ancient Near Eastern religions and the Christian Succession in the Eastern Churches, making it a suitable vehicle for continuity in our times. In the Western Churches, the Apostolic Succession existed in the many currents of the long-enduring state religion of Rome, which can be traced to the early Roman ruler Numa Pompilius, founder of the College of Pontiffs and the office of Pontifex Maximus, hundreds of years before Pauline Christianity; passing through the Roman Imperial State as one with the Emperor as Pontifex Maximus from the time of Julius Caesar until the Christian Emperor Gratian renounced the title in 379 E.V., apparently in favor of the Bishop of Rome, Pope Damasus I. According to the Encyclopaedia Britannica, "The title pontifex was used of Roman Catholic bishops and pontifex maximus of the pope by the end of the 4th century." The continuity from the most ancient spiritual sources should be obvious here, and its historical value in continuity for the New Aeon equally valid, all other considerations and theories aside.

(This constitutes the full succession of Rome, through Pope Urban VIII, his Archbishop of Rheims, the Archbishop of Mieux, and the subsequent accepted lineage of the Dutch Old Catholic Church through Archbishop Gerardus Gul.) 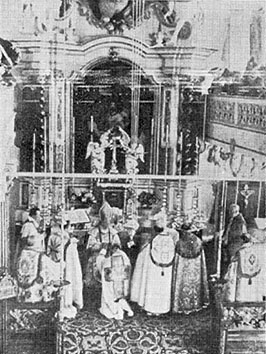